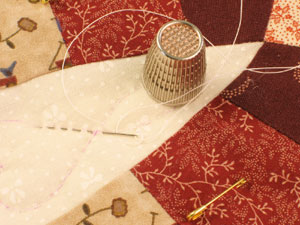 In the corner of my daughter’s room is a little four-poster bed. On it lies my favorite doll, which I saved for my children to play with. She’s covered with a tiny pink coverlet edged in hand-tied fringe. The coverlet was my first sewing project, made when I was nine. The pleasure of creating lovely things with needle and thread has not diminished.

A grandmother shares her love of sewing and her gift becomes the thread that binds generations together.
Grandmother was an accomplished needlewoman. As a little girl I felt she could make anything in the world. When my favorite dress became torn beyond repair (it really wasn’t intended for climbing trees in, my mother observed) Grandmother rescued it with beautiful tucks and clever pockets that hid the tears. If I admired a blouse in a magazine, it’s twin would appear a few weeks later made even better by some pretty piping or special buttons. My dolls had wardrobes fit for a princess.

Mother loathed sewing and swore the talent skipped generations. When Grandmother came to visit, her gift to Mother was to empty our mending basket.

To a child, her sewing box was a magic treasure chest: brightly colored spools arrayed in neat rows, scrollwork scissors in a tiny red leather case, glass headed pins bristling in a red cloth tomato from whose green-leaf top hung a little sawdust- filled strawberry for sharpening needles. Her thimble was too big even for my thumb. Lifting out the top tray by its satin ribbon handles, I would find lengths of lace, cards of colorful rickrack and, best of all, the button box.

As Grandmother would stitch, I would sift through the buttons sorting them by color or shape or size. There were sparkling rhinestone squares, little blue wooden buttons left over from a baby sweater; engraved pewter hearts; buttons of plastic and brass and lots of mother-of-pearl buttons cut from shirts too worn to be rescued. Grandmother wasted nothing.

For my ninth birthday, Grandmother gave me a sewing box just like hers. I carefully pulled out the little drawers and discovered she’d lovingly filled them with spools of thread arranged by color, brand new cards of snaps, papers of pins, a thimble just my size and a beautiful button box filled with some of my favorites from hers.

In the fifties, Home Economics was required for all junior high school girls. I still recall my first glimpse of that wonderful sewing room with its two neat rows of shiny black sewing machines. Mine was by the tall window and had a drawer full of mysterious metal contraptions whose uses were slowly to be made clear to us throughout the coming year. We learned to wind a bobbin, make a flat-felled seam and master that most difficult of tasks — putting in a zipper. As we moved from pot holders to aprons to gathered skirts, we all began to plan our project for the spring fashion show. A red calico shirtwaist was my crowning achievement. I even made my first attempt at custom couture: I added patch pockets and reduced the size of the collar. As I walked down the runway to the applause of family and friends I saw Grandmother’s proud face and smiled. Only she knew I’d ripped out the zipper three times.

When I was fourteen, my parents gave me a clothing allowance. I quickly realized I could buy one skirt or make three. The beautiful prom dresses in Seventeen magazine could be recreated once Grandmother showed me how to adapt patterns. As my skills increased, I no longer suffered the frustration of designing a dress in my mind’s eye and being unable to find it in a store; I could make it. I graduated from Simplicity patterns to Vogue. But in racing to complete an outfit, I frequently made mistakes. One afternoon, finding me in tears over a totally ruined corduroy jumper, Grandmother soothed me by showing how we could at least salvage the material and make a vest.

She also encouraged me to learn the discipline of finishing a step or two at a time and then putting away my project for another day. The careful progression from cutting to marking to basting to finishing created an orderly pattern in my teenage life. I began to set aside a time for sewing whenever I needed a retreat. Concentrating on the precise intricacies of fitting in a gusset distracted me from such adolescent anxieties as biology tests, boyfriends or cheerleader tryouts.

Prom dresses gave way to business suits. As our house filled with the excitement of my wedding, Grandmother watched with pleasure as I packed my home-sewn honeymoon wardrobe: a long skirt for fireside wearing at our ski lodge, a ruffled blouse for my first New Year’s Eve as a married woman. For our new apartment, I slip-covered our hand-me-down furniture and made curtains for a nursery.

When our first baby arrived, I learned to appliqué; little sailboats and trains decorated his sunsuits. The arrival of two daughters became an opportunity for embroidery and ruffles. In the midst of raising small children, the quiet discipline of sewing combined with the satisfaction of creating special clothes for my children made naptime sewing sessions my own brand of therapy. I realized then, that my grandmother’s gift to me has touched all realms of my life for she helped me see the fulfillment in creativity which has extended far beyond needle and thread.

Mother was wrong. The talent of sewing does not always skip generations. Grandmother has been gone for many years now, but her gift to me continues. For, as my children have grown and wanted things they could not find or afford, they too have discovered the creative pleasures of sewing. Our rock climbing son, recoiling from the expense of Lycra climbing pants, made his own. Our older daughter brought home thrift shop finds and altered them to become her own special creations. The youngest has learned the knack of combining pattern pieces to create a totally unique garment.

When I am blessed with grandchildren, they will each receive a special coverlet made from scraps of fabric I’ve saved from all the things I’ve made for their parents. The coverlets will certainly be bigger than that one I first made so long ago out of a bit of pink seersucker from Grandmother’s scrap basket. But they will be stitched together with the same thread she gave to me, the thread that binds generations together — the thread of love.

A version of this appeared in the January-February 1999 issue of Mary Engelbriet’s Home Companion.